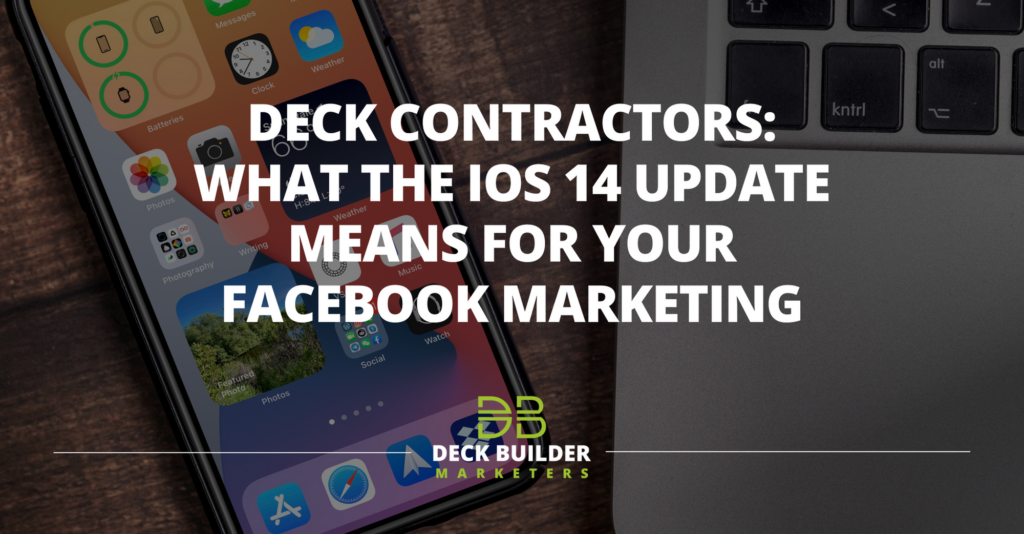 There’s been a lot of fuss around Apple’s new “iOS 14 update.”

Due to changes with iOS 14 for Apple users, the update will affect Facebook advertisers. Some functions and tools of Facebook ads will be affected, but don’t worry.

Moving forward, businesses will have to work around these changes, and luckily, we have a few tricks up our sleeves to help your ads THRIVE even with the update.

Deck builders have benefitted immensely from running ads on Facebook, so it’s important that you understand the changes involved with the iOS 14 update.

The update will pose a few challenges when tracking performance and optimizing ads. But don’t worry, these types of changes happen all the time in marketing.

So, what’s the main issue?

Apple users will have to respond to this pop-up when using certain apps (such as Facebook, Instagram, and WhatsApp): 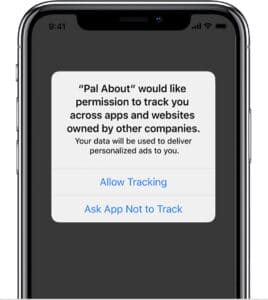 This pop-up is the “ATT (Apple’s App Tracking Transparency) prompt.”

Let’s just call it the Apple pop-up to avoid jargon ;).

What does the Apple pop-up do?

It asks iPhone, iPad, and Apple users in general if they want their behavior to be tracked by apps. When Apple users open the Facebook app, they will have to respond to the Apple pop-up.

If a user accepts (by clicking “Allow app to track”), Facebook is then allowed to track the user’s actions (clicks, conversions, page visits, etc).

This data that captures online behavior about the user is passed on to Facebook advertisers (like us). This data is pretty useful because it helps us deliver better, more effective ads to the right kinds of people — the ones you are trying to reach with your deck business.

Following? Cool. So, how is this new pop-up going to make things any different for Facebook advertisers like you? What’s the change?

Before the update, this popup didn’t show up, and tracking had always been enabled for ALL users.

In other words, users now have to deliberately choose if they want to be tracked by apps. Before the Apple pop-up existed, Apple would track all users (as if they all had selected “Allow app to track”).

As you may be able to figure out, if a lot of people choose not to be tracked, Facebook and advertisers will have fewer data.

What’s the problem with having less data?

Data is essential to make effective ads. We need it to figure out what’s working, what’s not, whether people are clicking your ads, how often, etc.

By knowing how users behave around our ads, we can optimize them to get a higher response from your target audience.

Also, many important functions of Facebook ads rely on this critical
“consumer behavior data.” Retargeting is one example.

What is retargeting? In marketing, retargeting is the tactic of showing ads to people who have already interacted with your brand.

Without tracking, we won’t have the data to pin down a user and retarget ads to them.

To recap, the iOS 14 update will affect advertisers because:

We’ll show you soon how we’re working around this.

Will iOS users agree to the Apple pop-up?

If you’re wondering why this pop-up is concerning Facebook and its advertisers – “Facebook thinks” most Apple users will disable tracking if given the choice.

And they have…at the time of writing this article, Only around 4-6% of users have actually clicked to allow the app to track them.

If you look at the prompt, would you say it looks friendly/harmless or intimidating for users? 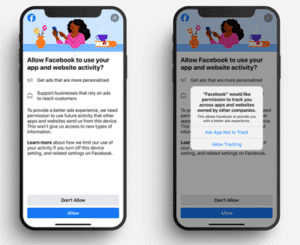 You might be thinking… “But this will not affect desktop or Android users, so it shouldn’t be that big of a deal.”

And I get you, it’s a good point. But a big part of the problem is that 98% of Facebook users use their mobile phones to access Facebook.

Furthermore, the U.S. loves Apple, and the market share of iOS is the largest here vs. other operating systems.

The lack of user data will pose new challenges for advertisers and small businesses like your deck building company – especially those in the U.S. We will only be able to track a fraction of all users.

Thankfully, all isn’t lost. It’s just that we’ll have to adapt to the changes by finding new ways to do certain things.

Also, learning how to work around them will give your business a razor-sharp edge that will help you stand out from your deck builder competition.

Consequences – What the iOS update means for advertisers

As we mentioned above, The iOS update was released in early spring, and at the time of writing this article, only around 4-6% of users have actually clicked to allow the app to track them.

An important issue with the IOS update is that the Facebook pixel can’t track users that don’t accept the Apple pop-up.

The Facebook pixel is a code that you place on your website to track the actions taken on your site (clicks, purchases, page visits).

It has always been crucial for tracking conversions, retargeting, and many other marketing practices.

Because Facebook won’t be able to track everyone as efficiently as before, businesses need to find new ways to work around the lack of pixel data. This will be critical to keep producing sensational results! (Don’t worry, we’ll show you how.)

Ads Manager and Ads Reporting will be affected by the update:

Facebook is changing the default attribution window that accredits a conversion to an ad view or click.

What in the world does this mean???

Facebook describes an attribution window as “the number of days between when a person viewed or clicked your ad and subsequently took an action.”

Let’s say someone clicks one of your ads and converts later on.
With an attribution window of 10 days, Facebook would only report the conversion if it happened within 10 days since the ad click.

If the user converts after the attribution window is over, Facebook wouldn’t count it as a conversion.

We’re used to having a default window of 28 days for clicks and 1 day for views. (So if someone clicked on your ad and converted within the next 28 days, Facebook would report that as a conversion.)

The longest window you will be able to choose will now be:

Because of this change, it will seem like your campaigns are performing worse.

Any conversions that your ads make after 7 days will not appear in Ads Reporting, so you will need to take this into account – especially if many of your conversions tend to take longer than 7 days.

It will take longer for Facebook to return data on campaigns.

There will now be a delay — 48 to 72 hours — on campaign reporting. In other words, we will have to give campaigns more time to see how they are performing before making any changes.

Campaigns will have to run for at least a week before we can optimize them, whereas before we could make decisions in around 3 days.

The good news is that Facebook is coming up with a countermeasure to the lack of data problem — Aggregated Event Measurement.

To sum up the point of this new protocol, it’s going to help better track the performance of ads while complying with the iOS update.

Will this fix the whole issue? Probably not.

We should note that Facebook has been known to exaggerate in the past, but it’s in your best interest to assume they’re not. This update could render your campaigns ineffective overnight if you’re not prepared (but we’re here for a reason).

When a user selects “do not track,” the conversion events of that user will be ranked based on how important they are to your business.

So, if a user goes through 2 conversion events …

You will only be able to see what you set as the most important event, in this case, scheduling a free consultation.

(Before the update, you could see every event that a user took).

There’s a limit of 8 events you can set to track per domain, and due to the 48-72 hour reporting delays we talked about, you’ll have to wait a bit if you make any changes to them.

Pixels are now tied to domains

The limit of 8 events is set per domain – Facebook pixels are now assigned to domains instead of ad accounts.

Make sure you set up Aggregated Event Measurement in Facebook Business Manager and verify your domain.

Measures – How we’re reacting to the iOS 14 update

These are the most important measures we’re taking to help our clients adapt to the situation.

It will be more difficult to collect data due to the new attribution window, so we will have to get more data from Google Analytics (a tool by Google to track customers).

By adding UTM codes to your Facebook Ads, you can get more conversion data outside of Facebook. UTM codes allow us to track which ads people are clicking, what ad campaign, and what channel. The good news is we can see this data in Google Analytics.

You can compare this with the data on Facebook Ads Reporting to track your ads’ performance more accurately.

We will seek to keep users on FB

Since all data within the realms of Facebook can be tracked, we will seek to keep users on Facebook when given the chance. We’ll be able to gather more data when people stay within the Facebook platform. For example, using things like Facebook Lead Form ads, instead of sending people to a landing page.

We will be comparing conversion data in GoHighLevel (multi-purpose sales & marketing software) to make sure it all matches up with the data on Facebook. This will give us more references to make sure our data is accurate.

For Google Ads, we will be building remarketing audiences from all website visitors rather than Google Ad Visitors only.

Custom Audiences for Google Display Network ads have already been performing better than Remarketing in many instances. As Remarketing audience sizes continue to shrink, we can replace Remarketing with Display Campaigns using Custom Intent Audiences.

The iOS 14 changes present challenges, but if you plan for them, test your campaigns, and make sure you’re used to the new attribution windows, you should be OK and not surprised.

Also, make sure that you’re not relying solely on Facebook ads. Putting the update aside, marketing is an ever-shifting environment, and you shouldn’t put all your eggs in one basket anyway. 🙂

And if you ever need a hand with your Facebook ad campaigns (or with marketing in general), remember that working with an agency like Deck Builder Marketers can help you feel reassured that you’re taking the right steps moving forward.

We’ll take care of staying on top of the news, giving you more time to focus on your business and on pleasing your clients.

Schedule a complimentary, Custom Marketing Plan with us today.